What's so great about Russian painting?

I had been collecting fine art (digitally) for some time before discovering Russian painting. It took some time before I realized that there was something truly special about the Russian tradition. So what is it?

I think many of the particular qualities about Russian painting that make it great, and unique, stem from the Russian landscape itself, and from the character and history of her people. The Russian landscape, as many a would-be conqueror has discovered, is vast, elemental, capable of great ferocity as well as transcendent beauty. Not surprisingly, there has been for centuries a great tradition of landscape painting in Russia.

I think one of my favorite things about Russian paintings of people is that, unlike many other national traditions, they are unafraid to depict strong, dramatic emotions.

To start this blog off, I thought I would share a few of my nominations for greatest Russian paintings - some of the best of the best.

First is one of the greatest of all Russian nature paintings, by the celebrated landscape artist Ivan Shishkin. This amazing creation is a prime example of the twin characteristics of Russian landscape art: fine detail and painting on a grand scale. 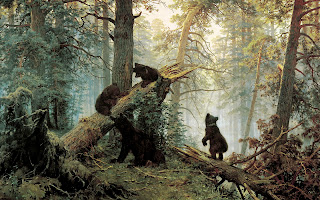 Another painting on a grand scale is the following celebrated work by Ilya Repin. The canvas measures over 6 feet by 11 feet! The story told in this painting is of a group of Cossacks writing an insulting and profane reply to the Turkish Sultan who demanded that they submit to Turkish rule. 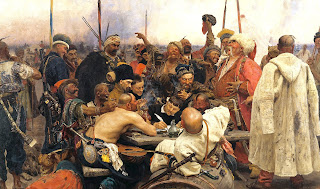 Ilya Repin: Reply of the Zaporozhian Cossacks to Sultan Mehmed IV of Turkey (1880-1891)

I think no other nation than Russia would be capable of producing this following work, a stunning denunciation of the futility of war. 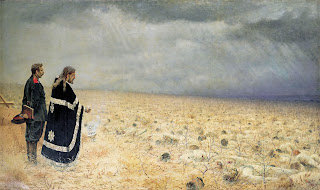 Vasiliy Vereshchagin: The Lost - Funeral Elegy for the Fallen

Concluding this mini-survey of great Russian painting is the following by Vasily Perov, perhaps the single most atmospheric painting I have ever seen, depicting a suicide victim. 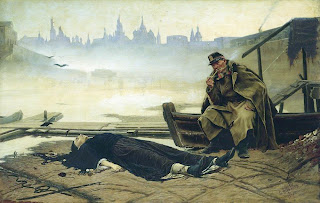